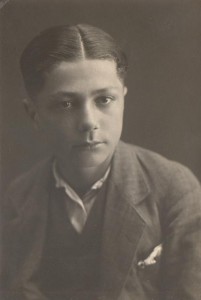 The poet, writer, researcher and publicist Dhimitër S. Shuteriqi (“Shuteriqi”) was born on July 16, 1915 in a house inherited from his great grandparents, in the prominent neighborhood of “Kala” in Elbasan. He comes from the Shuteriqi family lineage, known in Elbasan since the XVIII century.

From an early age Shuteriqi was brought up with great inspirations about culture and the homeland, feelings following from his relative, the great Renaissance man, Kostandin Kristoforidhi. These feelings were a result of the books and manuscripts that the family inherited from Kristoforidhi, but also frequent conversations about all that Kristoforidhi symbolized as the “Father of the Albanian language”.

Simoni, Shuteriqi’s father, was an eminent patriot since 1908, when he represented Elbasan in the Congress of Manastir, where they approved the alphabet for Albanian language. Together with other patriots, Simoni was a founder of patriotic clubs that were actively working to spread the use of the Albanian language during the dark ages of the Ottoman invasion. In 1909 Simoni was secretary of the Commission of Elbasan that opened “Normale”, the first middle school in Albania. Simoni, who was one of the first professors at this school, became acclaimed as the author of various language studies published at the time. Simon Shuteriqi is a “Mësues i Popullit” (“Educator of the People”) honoree.

Shuteriqi attended the Lycee Français in Korça during junior, middle and high school from 1927 to 1936. This was a crucial period for bringing him close to literature and the socio-political life of the time. This period defined his emergence as a person of the arts, culture and social progress in the backward and semi-feudal Albania of 1920-1930. During this period Shuteriqi began his creative writing, mainly poems published in newspapers and magazines, and later his first books, Kangët e rinisë së parë (Songs of the first youth) (1935) and Kangë? (Songs?) (1936). These works were critically acclaimed at the time as “manifestations of a new era”.

Shuteriqi attended university studies in France between 1936-1942, where he studied philosophy at the University of Grenoble, and justice at the University of Lyon. During these studies Shuteriqi learned about philosophy and justice from antiquity to modern times; whereas, the French intellectual and cultural environment, provided a wealth of knowledge and helped his intellectual and professional progress in the field of the arts.

Shuteriqi was actively involved in the War against Fascism in Albania; he was commissary of the Qukëz-Bërzeshtë Battalion, member of the Verçë-Sulovë Battalion, partisan in the war against fascists and active member of the illegal press. During the WWII years he met Mynever Fico, who had just finished high school. Fico became his lifelong partner, with whom he formed a family and had three children.

Shuteriqi is part of a generation of intellectual and patriotic Albanians that worked very hard and struggled to create a cultural atmosphere and an education system based on science and research. But their work was undoubtedly affected by the limits of the Communist Regime in the second half of the XX century.

Shuteriqi is one of the founders of the League of Writers and Artists of Albania and President of the first higher education school in Albania, Instituti i Lartë Pedagogjik (The Higher Institute of Teaching), which was opened in 1946.

Shuteriqi is one of the most prominent authors of the Albanian literature of the second half of the XX century. His fictional works were mainly written in prose. Through his talent and rich culture he created popular and acclaimed short stories, which were widely published during his time. Some short stories and novels have also been published posthumously. His novels attracted the attention of Albanian producers, who used his works as basis for some of the most popular cinematographic realizations of the time, such as Koncert i vitit 1936 (Concert in 1936), Udha e shkronjave (The route of the letters), or Nëntori i dytë (The second November).

Shuteriqi’s stories focus on the Albanian people, their life, their psychology and their traits. Parallel to covering contemporary subjects, a good part of his writings reference historic events and characters. Shuteriqi was recognized as a skillful writer able to bring to life far away periods starting from the XV century and on.

Shuteriqi is renowned for his extensive and multi-faceted scientific works, which are well recognized in the fields of language, literary historiography and folklore. His great work has shed light over the beginnings of the Albanian writing especially with Shkrimet shqipe 1332-1850 (Written Albanian works from 1332 to 1850) and Tekstet shqipe dhe shkrimi shqip 879-1800 (Written Albanian works and the written Albanian language from 879 to 1800). These works have uncovered the roots of the Albanian literary tradition and culture, have introduced prominent figures of the Medieval and Renaissance national literature, and have developed the study of our folklore.  Through Shuteriqi’s works the Albanian public was introduced to new literary sources, little known or unknown antique manuscripts written in Albanian and scientific contemporary concepts. It was exactly this kind of work that caused his colleagues to dub him “The last Renaissance man”.

One of Shuteriqi’s passions was drawing. He leaves with us around 500 drawings, mostly portraits. The Albanian public had the opportunity to appreciate this legacy in the last years’ of Shuteriqi’s life in two exhibitions, the first at the Art Gallery of Tirana and the second at the Gallery of Pristina. In both exhibitions his drawings were noted for their elegant and modern lines, skillful styles and breadth of characters depicted in them. Shuteriqi drew well-known figures of the arts and sciences, individuals of various social backgrounds and characteristic faces of various regions of Albania.